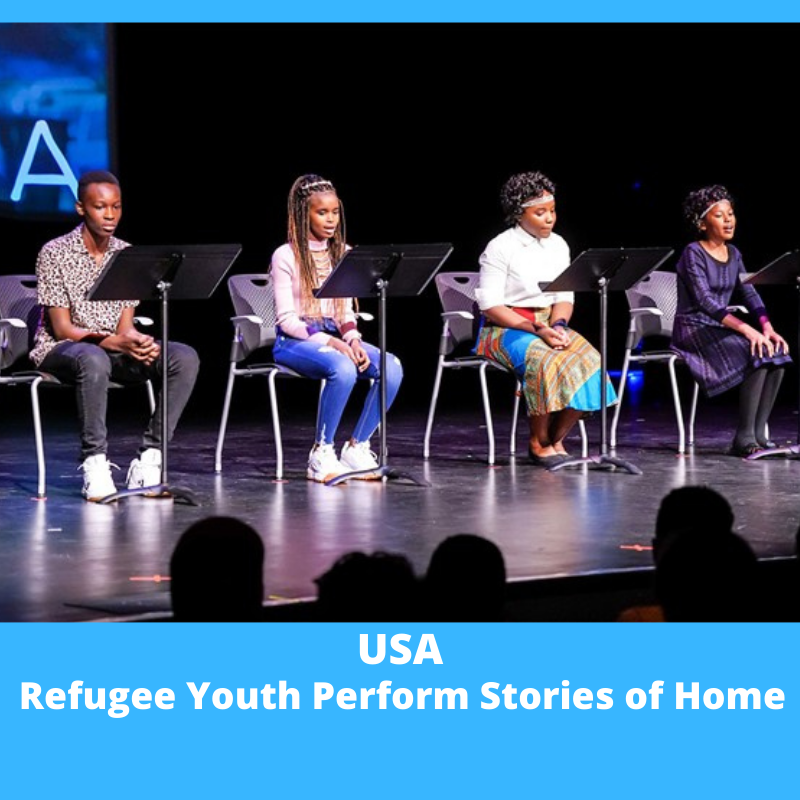 Written and submitted by Taylor St. John, Education and Engagement Specialist at the Orpheum Theatre Group in Memphis, TN.

Beginning in the winter of 2019, the Orpheum Theatre Group in Memphis, TN made a commitment to empowering young people to tell their stories in their own words through the creation of the From Where I Stand program. It was in that same winter of 2019 that young people from organizations, schools, and community groups from around the city of Memphis came together to share stories and turn those verbatim stories into a theatrical production. While many partnerships were forged to make the initial From Where I Stand a success, our collaboration with the Refugee Empowerment Program left us thinking about how we could create a program specifically with/by/for refugee youth in our community. By co-creating a production between refugee youth and teaching artists from the Orpheum, we believed we could guide young people through a process of self-discovery while building confidence and community around both the similarities and differences of refugee experiences in Memphis, TN.

So, in the fall of 2019, we embarked on a new collaboration with the Refugee Empowerment Program and continued deepening our relationship with the organization’s leadership and community. In outlining goals specifically tailored to the community and organization, we were able to maintain the integrity of telling youth stories through theatrical performance, while also aligning to the mission and values of all parties; including the empowerment of young people in their journeys as English language learners, reflecting on their lived experiences as refugees, and fostering creative and socio-emotional development through the arts. In addition, we created the mutual goal of sharing the free performance with the community at large on the stage of the Halloran Centre for the Performing Arts (a stage that also features the performances of renowned national and international artists). By providing a high-profile platform, our hope was to amplify refugee youth stories within our community, provide awareness of the diverse perspectives that exist in our community, and demonstrate our commitment to the stories of young people.

Throughout our three-month rehearsal process, I served as the director and co-teaching artist alongside Santyria Johnson (who also served as the production choreographer and stage manager). At the beginning of the process, we were met with healthy skepticism from the young people; many of whom had never participated in a theatre-making process (especially a generative one that started without a script). To harness commitment and build trust, we began our process playing theatre games that allowed us to introduce the actor’s tools (body, voice, imagination) while building our capacity for vulnerability and exploration. During these ensemble building sessions, we also began to explore a theme that we could later use as a springboard to tell stories from. We landed on the theme of “Home” because it allowed youth the openness to tell unique and specific stories related to their diverse and sometimes complex relationships to home.

We then began the process of story circles in which we, the teaching artists, learned how these young people feel and think about their relationships to home. At this stage in the process, we had to work hard to ensure them that there was no “right” story that they needed to tell and that we weren’t looking for a particular kind of story as long as it was personal and compelling to the young person telling it (we learned from REP’s Executive Director, Camela Echols-Blackmon that refugees often have other people telling their stories and, in doing so, there are often false expectations about the kind of story that people want to hear instead of placing the focus on the kind of story they want to tell). Youth told stories of their homelands, of their initial journeys to Memphis, of their initial expectations of a mythic “America”, of hijinks with their families and friends. For us to generate our verbatim scripts, we record these story circles and transcribe the stories word-for-word before editing and arranging the stories into a dramatic script.

The day that we read the first draft of the script marks a significant turning point in our process. Up to this point, our work has been largely theoretical without many tangible products to ground us. But, when young people see their names in the script with their word-for-word stories, there is a powerful moment when the reality of our upcoming performance comes into focus. From this point on, we began a more traditional rehearsal process where we dramatize the stories as the storyteller performs the script from a music stand. While many of these young people did not have previous experience as actors onstage, many of them did have experience as dancers and movers. My co-teaching artist, Santyria (who specializes in West African dance), created an exchange where youth would teach her movement from traditional dances in their East African homelands and she would incorporate elements of the movement into her original choreography.

Another powerful milestone occurred during our final week of rehearsals when we moved onstage and began incorporating projections, lighting, and sound elements to the production. For youth that have never participated in a theatrical process, this was the moment when their rehearsals started to take a more tangible form; nerves and excitement started to kick in as they looked out at the empty seats that will soon be filled with members of the public, their families, teachers, and friends. The act of sharing a personal truth through an artistic form (and the vulnerability required to do so) became the next obstacle for them to overcome. When it came time to perform, the excitement, relief, and pride in overcoming these challenges becomes a tangible achievement for each young person.

At the conclusion of each performance, the storytellers danced, bowed, and sat on the edge of the stage as we facilitated a reflection with the audience. The audience members spoke about similar struggles and joys, offered encouragement based on their own journeys coming to Memphis, and reflected on what they had learned about the experiences of immigrants and refugees.

The From Where I Stand program exists to make space for the stories of youth in Memphis that may otherwise go untold. Through partnership and collaboration, teaching artists, youth, and organizations are able to co-create theatre that honors both artistic excellence alongside valuing the lived experiences of youth in our community. To hear directly from the teaching artists, leaders, and youth that collaborated on the project, this video (created by Zack Orsborn) documents our process leading up to the performance.

Our process incorporated the generative techniques of Augusto Boal’s Image Theatre and Story Circle Processes that were inspired by Council (originating with the League of the Iroquois and the Peoples of the Plains and Southwest Pueblos) and Cornerstone Theater.