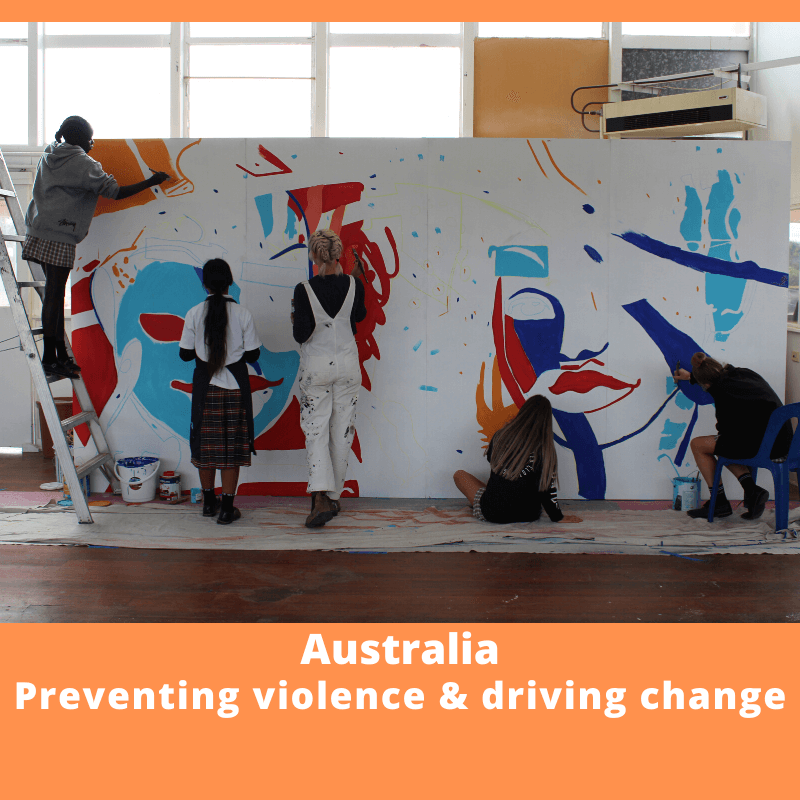 Project O has been successfully piloted in a federally designated ‘family violence hotspot’ of the North West coast of Tasmania and subsequently trialled and tested in 4 other sites. It currently operates in 3 high needs communities: North West Tasmania, Frankston (VIC) and Roebourne (WA)

Project O’s primary prevention approach engages young women, increases their sense of agency, and skills them up to deliver events in their own communities that change attitudes and de-normalise violence. Success has been immediate, is evidence based, and has led to awards such as the Human Rights Organisations Award (2016).

Project O is a layered approach, consisting of the following streams:

Project O builds partnerships across the community – from the women’s shelter, to the high school, to the footy club – leading to strong involvement in events put on by the young women.

Agency + Capability workshops are delivered, where the young women learn skills in a range of areas, such as: public speaking, event management, hospitality, media, self-confidence and advocacy, in preparation for running a series of events in the community around issues that concern them. Project O is currently piloting a new focus on digital skills, to prepare young women for 21st century workplaces, and promote digital inclusion.

Community Events, including examples such as:

Colourathon is a public art-marathon harnessing the global trend of mindfulness and colouring in. Young women are sponsored to colour in for up to 24 hours – each hour they raise money to assist young children in their local womens’ shelter, with a specialist therapy program. Local media, politicians, community partners and volunteers join the event, colouring in solidarity with the young women. The drawings are then animated and set to a song by a well-known songwriter, created during workshops with the young women.

The Colourathon is designed to generate a positive media campaign run by the young women, helping to drive a community-wide response to family violence – and promote generational change.

Currently in development is ‘Colourathon for Corporates’ – a kit version of the Colourathon assisting businesses to join in a corporate response to family violence, and support the leadership of young rural women.

O Play builds on the positive action taken by young women in their community, by creating a one-woman theatre piece, reimagining the story of Ophelia from Shakespeare’s Hamlet. O is written to be performed by an iconic older woman – an actor at the height of her powers – delivering a tour de force performance nationally and internationally. Locally devised versions created in workshop model the value and wisdom of older women to the young Project O participants, as well as feeding into an ongoing positive media campaign.

Project O is designed to build from the grassroots into a national campaign driven by young women – rolling out in communities across the country, changing attitudes to family violence and driving generational change.