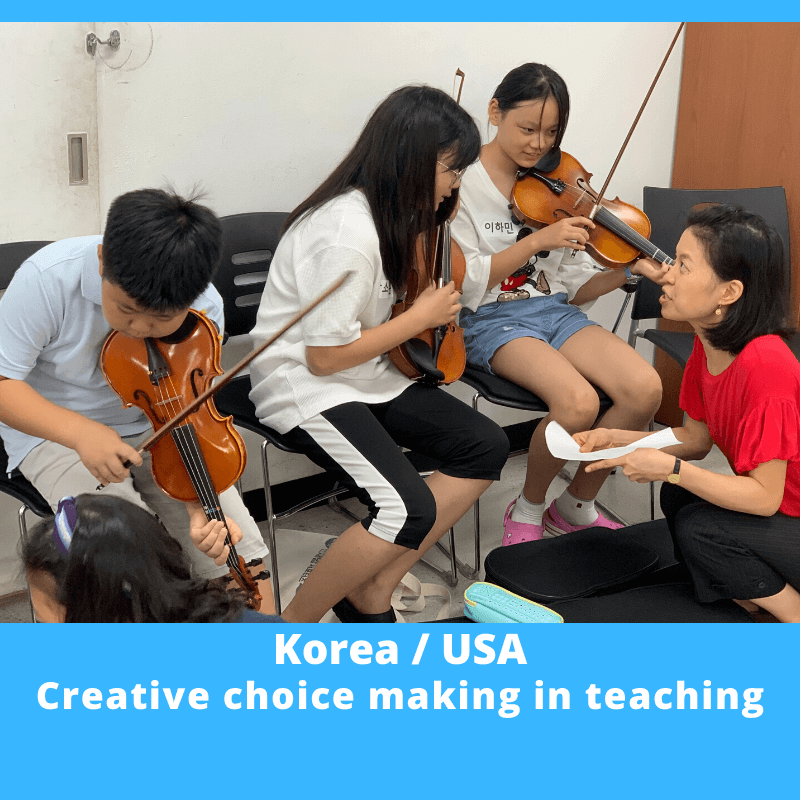 I felt so grateful to have had the opportunity to travel to Korea this past August, thanks in part to the Seoul ITAC grant. I collaborated with such dedicated people in the field of teaching artistry and the Orchestra Dream Seongbuk (ODSB) one of the El Sistema orchestras in Seoul, Korea.
Jeehye Suh, advocate of music teaching artists in Korea who founded the Socially Engaged Musicians group (SEM Network), and the conductor Jintak Moon were my collaborators. We planned workshops with both the Orchestra Dream Seongbuk youth orchestra and their teaching artists. SEM TAs were invited to observe and participate in reflection discussions after each workshop day.
My main goal of the workshops I gave both to the students and teaching artists was to share and model ways to incorporate more creative-choice making wherever possible when teaching music, whether it be during the warm-up or while composing with the group. I modeled activities on how to improvise and make composing accessible to anyone. The kids seemed to really appreciate being given the opportunity to make their own creative choices. Many of the TAs were receptive as well. Too often we have been taught to give information rather than try to spark the curiosity of the learner to discover on his/her own.
To incorporate more of my artistry in this project, I offered to write the ODSB a short orchestral piece that would include the kids’ input and creative-choice making. I sent surveys to both the TAs and kids with the help of Jeehye and Jintak before travelling to Korea. I wanted to get a sense of what the TAs’ experiences and needs were and the kids’ ideas about music before going to Korea.
In my survey to the kids, I asked about their musical tastes and what they liked to play on their instruments. I also asked them, “What change would you like to see in the world?” Their survey responses helped inspire the piece I wrote for them and was included in the improvisatory section. Here, they got to choose their rhythms and the octave ranges. This section represented the negative things they wanted to change for the better. The improvisation and the piece ends with positive change taking over.

In my survey to the teaching artists, I asked what they enjoyed about their work and what their challenges were. I discovered that the teaching artists in Korea have the same challenges and rewarding experiences as teaching artists in the US. The Korean TAs wanted to find ways to communicate with their students more effectively and make stronger connections with them. They also try to find the right balance between maintaining their own artistry while doing teaching artist work. I believe that we TAs have to be proactive about making sure our artistry is included in our work when possible and appropriate.

Throughout this time, Jintak would send photos and video clips of the kids rehearsing my piece. It was so heartwarming to see and hear and I felt like I was getting to know them better. And to my surprise, in response to my writing a piece for them, Jintak helped the kids compose a piece using the letters of my name, “Beata” (with the solfege “ti” to substitute for “t”) as the melodic motif. He sent photos/video of them working on this as well as the final score that he arranged.

Jintak and the TAs continued having the kids compose other pieces by playing games using chance methods. All these pieces would be performed at the culminating concert on Saturday afternoon at the end of my 5-day visit with them.

We also wanted to make the concert an interactive one, and the TAs and I worked on a script for the concert, inviting the audience to participate throughout. The audience was given a chance to participate by clapping in the middle section of a short composition the Family Orchestra and I composed together that Saturday morning. The TAs performed Sibelius’ Finalandia at the beginning and at the end of the concert. It was important to include the TAs performing just on their own, and they also played another piece by a Korean composer. We included lyrics of Finlandia that emphasized the spirit of community for the audience to sing at the end.

Musicians in Korea are still viewed mainly to be performers, and musicians who teach or who dedicate their lives using music for social good are not yet viewed as beneficial by the music institutions in Korea. Jeehye, with her SEM network, is trying to change that. One of the SEM TAs who observed the workshops with the kids asked a few kids what they thought of the workshops. They responded that it was fun and that they liked being able to make creative choices on their own, without the teacher always telling them what to do. My hope is that the TAs will involve the kids more in making creative musical choices.

Communication is important. Reaching out to the participants to connect with them before we met helped set up my visit. Because I had their responses from my initial survey and because Jintak sent photos and videos as they learned my piece, I felt like I got to know them even before traveling to Korea.

Teaching artists need the support of institutions in order for their work to be successful. Orchestra Dream Seongbuk, led by Jintak, has the support of the Seongbuk Cultural Foundation, which is home to the rehearsals. However, because funding from KACES (Korea Arts and Cultural Education Services) has diminished, it is a challenge to raise funds. Crowdsourcing is not the same as here in the US.

Not everyone is open to new ideas. It takes time and follow up to continue to communicate and share with those who may be wary of trying different approaches in teaching. It is challenging to change the perception that being a music teaching artist is a worthy and important profession, not less than that of a performer. I hope that I will be able to visit ODSB and the TAs again to get to know more of their work as TAs. Perhaps that will help bridge the different approaches to teaching. I look forward to continuing my collaboration and communication with them.